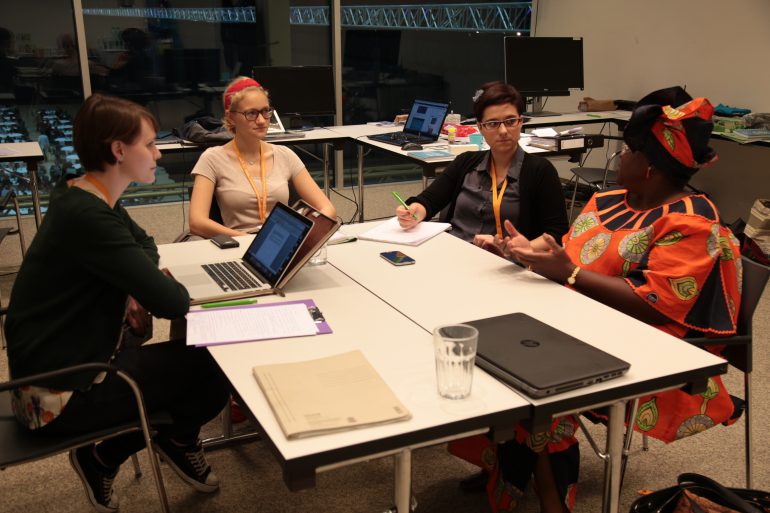 “We are not there yet”

During the Ecsite conference we had a conversation with Elisabeth Rasekoala who shared her thoughts about her work, equality and her stay in Graz.

How did you get in touch with Ecsite?

Well, actually, Ecsite got in contact with me! Some time in October last year I got an e-mail from Julie Becker and they invited me to be a keynote-speaker. That’s basically how it started. I was pleasantly surprised by the e-mail because I have been involved with the Ecsite quite a few times before. It is my first conference as a keynote-speaker though. The last time I came to a conference was in 1999 or 2000 in London.

What can your listeners can expect from your keynote?

I’ve been told that I got the licence to be provocative, to challenge, to make people think differently and give them more of a global perspective. Of course this is a European conference, but there are people here from many countries outside Europe too. I think the organisers wanted to see some of those global perspectives reflected as well so that people have things that resonate to them beyond just the European frontier. There are certain elements that I’m trying to cover. That will be a challenge in 45 minutes but I will try.

Is it hard for you to be provocative? Are you scared you might offend someone?

I think it comes with being older and when you’ve worked with so many global frontiers that you actually realize that the biggest problem we have is that the people are afraid to face the truth. We all end up in a world of lies, in a layer of lies. Sometimes you just have to find the courage to start the process of unpicking that. I was with a group of ladies last night and we were just focussing on the lies that we tell each other as women and the layers of lies that older women tell younger women like you. It was a fascinating conversation. We talked about how we have lied to you, deceived you. With that, we are setting up young women to fail. I think there is a sense that we are in a different world now where people want to see some of these things unpicked. So, we can actually give the young people a much fairer, much better sense of what the world is really about and what their possibilities are.

How do you do that? Are there any strategies?

I think a key-strategy is to have very straightforward conversations with young people. And it might be easier for me because I was very fortunate to have that with my parents. I had a father who took me at a five-year-old, sat me down and had a very straightforward conversation with me about gender equality. I was like “Wow!” I felt so empowered. It was done with love and care but it was still a serious conversation. He didn’t try to sugar-coat it and put it in syrup but I felt so empowered, I felt like I was ten foot tall. If we can get that kind of straightforward conversation to young girls, it’s like you are being vaccinated, you know.  It stays with you your whole life! And I’ve been going around the world with this wonderful sense of self-esteem and self-belief that nobody can take away from me. From that early honest but caring, loving conversation about what it means to be a young woman, to grow up as a woman in the world. And that’s just wonderful.

I found that the topics gender and race, and the discrimination because of those are most important to you. Is there a project that you support fully?

For me it’s the universal sense what all these challenges are all about and I’ve got to a stage now where I am saying: We need to be moving away from projects and actually look at institutional frameworks – because that´s where the real sustainability lies! We have done projects to death, as the Americans would say. We have done the project gender to death, you know? We have done so many mini-projects and still things haven’t changed. That tells us that we need to move to a much more multileveled institutional capacity building transformational agenda, isn’t it? Because these things happen or do not happen in institutions, are you with me? Whether it’s a science centre or a museum or a university- these are institutions.

And it’s about how we move away from itty-bitty projects, which sometimes do not even add up cumulatively in substance – or qualitatively, or quantitatively to this bigger picture. It’s harder and it’s like Barbara (editors note: Barbara Streicher, Head of Science Centre Network) said to me: “Why aren’t we doing it?” Because the simple truth is: It is harder. It is harder to work within institutions. It is easy to do little projects here and there with individuals where 50% of them are already converted. Then you can make yourself feel good and pretend that you have done something when you really haven’t. We need to move away from this! Unfortunately, the funding systems do not help because our founding fathers or mothers still like to put money on a kind of project basis. The language of the project driven funding mechanism doesn’t really help in terms of institutional approaches but I think it is harder to do the funding structures – and that’s the reason why we should do it because logically it is the sustainable answer. That is where transformation lies. Projects are useful but for real sustainable embedded transformational change we need to move beyond projects and start looking at institutional frameworks.

The change wouldn’t reach through every layer of life society, environment, and empowerment of women, would it?

That is how you then build your critical mass for sustained transformational change. We are still at the base level where we are working with individuals through projects and that is nice and good but I don’t think that’s going to give us the critical mass that we need to scale up to the next stage of institutional and then the next stage of the field of itself.

So you think there is still a long way to go?

Absolutely. And the funding mechanisms do not help! We need to innovate them, so the mind-set can change too.

How do you react to all those who are against your work? That can’t be easy all the time.

It is not easy but I think that humour helps, so I laugh a lot and I use a lot of visual language and humour. I think that really helps people to get the message. They are laughing, they are falling off their chairs, but they get the message. Universality helps a lot too: if you can position what you are saying across all the universal examples of our humanity. Then people realize that you are not picking on a particular person or sector or particular geography, but universal challenges. The fact that young females growing up in a European Country where the lights work, where water comes out of your tap – that doesn´t mean that their challenges as young females are not as valid as the challenges of peers growing up in parts of the world where there is no electricity, where there is no running water. Sometimes we make this dizzy ingenious argument and we actually overvalue and undervalue those issues. So yes, context is important, but these are universal challenges and we shouldn’t give the impression that women in EU are sorted out because guess what? “These things had been addressed.” The basics are there and then we see that gender is still a problem in the developing world. I am honest with you because here there is complacency about that: “Oh, we have arrived. We have done gender. Women are sorted out”.

And everybody is relaxed whereas in other parts of the world that arrogance is not there. That complacency is not there. Women are a lot more active, they are challenging. So you have to be very careful as to moving away from the fact that these are universal challenges and I think that is how you enrol more people. That is an issue that doesn’t need to be your own. Does that make any sense?

Yes. It just has to sink in.

It is very deep, isn’t it? People don’t think of it on those levels. We are so easily patronised. I call it the “Hollywoodization” of knowledge. Everything is in Hollywood style. So you don’t really get to think beyond the outline.

Especially this gender discussion. It is all around. Everyone is saying: Not again. It is done. It is over.

Yeah, but it is not over, my dear. As long as people tell you it is over, it’s obviously not. When someone has to tell you that it is over, it is definitely not! For instance the U.S election: the fact that we are still talking about Hillary Clinton being special because she is a woman shows that the debate is not yet over. We don’t talk about Donald Trump being a man. When do we read an article that mentioned Trump being a man? It is liking saying: That wall is grey. It is so obvious but why isn’t it so obvious for Hillary? Why is it mentioned in every article? That tells you that we still have a long way to go. And this is the US – the home of the “brave and free”. So it is tough.

What about Graz. Is it your first time here?

Yes, it is my first time. I have been to Vienna a couple of times. Graz is so nice because it’s laid back but it’s still an active city. I have never been to a city that has such a combination of modernity and being chilled. You just want to lie down on the pavement and relax. They drive nicely on the road and bicycles. It´s like everybody here is on something. You just want to put it in a tube and say: “This is Graz!” and infect people in other cities. It is just wonderful to see that combination, I just love it. You feel so safe and everything is accessible. It’s amazing; cosmopolitan, modern and yet so relaxed. You rarely see that combination.

So it is not the last time you are here?

Oh I’ll definitely come again. It is a lovely place and a different experience. And I think there is something here to teach the world in how you can have cities that are like this. For me this is all learning and I try to pick all the different things. I am like a forensic detective trying to pick all the different elements. How do they make it work? This is wonderful, lovely. You must appreciate what you have and find a way of keeping it and not to lose it because that is what we find across the world. I would love to think that in 10 years’ time Graz will still be like this – that you will be able to keep this for the next generation. It would be a wonderful gift and a wonderful heritage for future generation of young people growing up in Graz.

This message is only visible to admins.
Problem displaying Facebook posts. Backup cache in use.
Click to show error
Error: Error validating access token: The session has been invalidated because the user changed their password or Facebook has changed the session for security reasons. Type: OAuthException